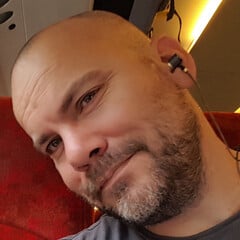 I have been making art for video games since 1999. I specialize in Character Art, modelling and concepting characters.

I began my working life as a Secondary school Art Teacher in inner city London for over 6 years. Hard work but immensely rewarding.

I had always loved video games however and gradually learnt enough about 3D modelling and animation until I could take the plunge and pursue my dreams. My first break was as a character animator on a football game. I quickly began modelling and doing concept art too.

My next role was at Independent PC developer Firefly Studios where I stayed for the next 9 years. I was responsible for character animation, rigging, and skinning , environment and character modelling, designing Ui, I managed outsource partners, mentored and scheduled other artists, lead the Art team, created VFX and did a lot of cinematic, storyboarding, marketing and concept work, press interviews and magazine covers. I gradually specialized in character concepting and modelling, from sculpt to game. I worked with Firefly from the start, in our bedrooms with a team of 5 until they became a multi-million selling independent mainstay responsible for the Stronghold, Castle building series.

The next 11 years I worked at Sony Playstation, London Studio. Initially during the PS3 and PSP days right through the launch of PS4 and PSVR. As Principal Character Artist I was lucky enough to to contribute to a number of award winning and ground breaking titles as well as being the sole in-house artist in the Internal Concept team developing new IP. From the top-selling AR games Eyepet and Wonderbook, to VRWorlds the biggest selling VR title of all time, and Blood and Truth, the only VR title to make number 1 in the video games chart. The variety in video games is one of the things I love most!

I am now Principal Character Artist at Sony Playstation/Firesprite Games.

Despite having a lifetime of experience I have always felt I am not good enough. There are so many talented people in this business, I am lucky enough to have worked with a great many whose abilities have awed and humbled me. Artists, Tech Artists, Designers, Coders and Musicians. I don't feel worthy but I try and will always keep trying to be better. Whatever I am called upon to make doesn't matter, the approach is the same, give it everything you've got! That's what I love about this career, you never stop learning and hopefully improving. Every day is different and they are always full of new challenges.